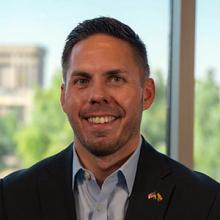 Prior to his appointment, Director Roemer served the State of Arizona in a variety of leadership roles including four years in a dual role as the Governor’s Public Safety Advisor and Deputy Director of the Arizona Department of Homeland Security, one year as the Governor’s Deputy Director of Legislative Affairs, and two years as the State’s CISO. Since the beginning of Governor Ducey’s Administration in 2015, Director Roemer has served on multiple Boards and Commissions including the Arizona-Mexico Commission’s Security Committee and the Human Trafficking Council.

Prior to working for the State of Arizona, Director Roemer admirably served in the Central Intelligence Agency for ten years. The final two years of his CIA career were spent assigned to the White House Situation Room, where he provided critical national security updates to the President, Vice President, and National Security Council. In this role, he briefed senior U.S. policymakers on a diverse range of national security-related issues.

In addition to his time in the West Wing, Director Roemer supported the CIA mission at its Headquarters in McLean, Virginia. Over his decade career in the U.S. Intelligence Community, he also completed assignments at the National Reconnaissance Office and the National Geospatial Intelligence Agency.

A born and raised Arizonan, Director Roemer graduated from Arizona State University with a Bachelor of Arts degree in Communication and a minor in Political Science. In 2021, he was recognized as a StateScoop 50 Cybersecurity Leader of the Year winner.